EDIT 20/3/13: My husband emailed Jin sometime back and he was so super kind to email back! Here’s an small excerpt from the email.

“Thank you for taking the time to send over the thoughtful and encouraging message.
I appreciate it.
Please send my love and blessings to Grace as well.
May The Lord’s love, grace and mercy continue to fall upon the two of you and your ministry!
God bless,

So much for this series being a holiday project. I only have one week left!

This week I was mightily encouraged by Dr. John Dickson on the Q&A panel on ABC. Not only were many Christians in Australia proud for his representation, you can see he was respected by those on the panel too. If you missed it, please check it out here. I’m so glad God made him what he is – a respected historian/speaker/lecturer (and minister?). It just goes to show that you don’t have to be working for a church FT or a missionary somewhere to somehow be effective for God.

It reminds me of this quote by Ralph Winter. He’s a famous and influential film producer. You might know his works – ‘The X-Men’, ‘Planet of the Apes’, ‘Fantastic Four’ and Star Trek movies. He says this (about Christian films):

“People come to a movie to be entertained first,” he said in a recent interview. “We have to master the art of filmmaking and create a powerful story before we think about how we’re going to put some kind of Christian message in the film. Most Christians fail in the film business today because even though their intentions are admirable, they haven’t learned the art and skill of making a great movie. We have to earn the respect of the viewer if we’re going to succeed.”

Basically, to be influential as a Christian in your profession, not only you need the right Christian intentions/passions, you want to be respected in your industry for your craft. 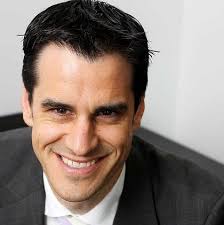 Another Australian who I greatly respect in this area is Mark McCrindle. You’ve probably not heard of him, but he’s a Social Researcher who you may have seen on various media outlets like SMH, Sunrise, Today Show, ACA…whenever they need some guy to talk about different Generations, he’s often there. I was also fortunate to hear him preach semi-regularly at our last church in Cabra. You could see his passion for Jesus and also the passion for his work.

I guess some people have the opportunity to combine their Christian public persona with the work they do (John Dickson), and others have them as separate (Mark McCrindle). But when you meet them, there’s no doubt that Jesus is important in their lives. Which ever way you go I think it doesn’t matter. Both of them are honouring God with their lives and working hard for His glory.

Ok! Sorry now for the Asians…

I remember Jin mainly from high school days. He shared the same last name as me and he had this interesting song ‘Learn Chinese’ – I had never heard a Chinese person rap before in more ‘mainstream’ sounding music.

You can read his testimony here at the Gospel Herald (Chinese Christian site in English) as well as his video below a few years back when he first became a Christian. It’s pretty amazing

His new album, first English one in 6 years, is pretty good. It answers a lot of questions people have and he also gives his testimony throughout. He now uses his talent for Christ.

I wish I could go back and delete my entire discography, at least before I got saved
Only concerned that I got paid
I was purely Hip-Hop’s slave and digging dirt for my own grave…

Even though its been a while since Linsanity, I guess I don’t need to say much about Jeremy Lin, besides that he’s like the ultimate ABC (as well demonstrated by KevJumba’s video ‘My New Son Jeremy Lin) who’s a Christian. So smart, speaks Chinese, well-rounded and passionate about Jesus – its very inspiring to us all. It’s so great to see him so bold about his convictions to a non-believing world. Perhaps take a look at his newly launched ‘Jeremy Lin Foundation’. See the videos below for info on that as his testimony.

The first time I came into contact with these two Korean Australian twins was at our RICE Big Day Out, back when they weren’t so huge. I was at the ‘RICE cafe’ and it was my job to talk to people about Jesus there. These two pretty girls rocked up and started setting up and singing. There were a small number of people who took notice but largely they were not ‘known’. Now, these girls are pretty famous with the Asian Australian community. Many years later I saw them LIVE again, this time not in some makeshift cafe at a community fete, but sharing the stage with other Youtube greats at the BoomBox festival – pretty cool we were sitting next to their family 🙂

Although they are famous for their covers on Youtube, they are not shy in sharing about their relationship with Christ in so many places – all over South East Asia, L.A. and also China!

A touching testimony of the story of their mum and their faith:

There are many other Asian Americans out there doing their own thing who seem to be Christians. I can’t imagine how hard that would be and the kind of hate they would get. Many of them are pretty well known and it must be fairly hard to be open about their faith.

1. Lindy from Bubzbeauty: Irish (?) Chinese living in HK with 1 million+ subscribers. Though famous for her make-up, through her blog, she encourages girls with her faith: “I know some of you reading this may disagree because you have your own beliefs. That’s fine. Are you wondering “Why are you sharing this for? Keep your faith to yourself”. No, I just can’t. Because Jesus says we are the light to the World. I refuse to hide the light by being quiet. I’m not going to go along with the crowd and I’m not going to deny him =) You want to bring Heaven on to Earth? Compliment someone today. Help someone in need. Shine light in someone’s heart. If you’re someone out there who wants to know God, I just suggest you to pray with all your heart. In time, you will hear his gentle whisper and experience his magnificent love.”

2. Arden Cho: Korean American actress/model/singer: “I was misunderstood because I thought that if I was Christian, believed in God,  and wanted to live faithfully, I had to put all my energy to serving in a third world country. I realized that I could still serve God by being out here. If acting and performing is what I want to do, then I need to do it well and give credit back to God.”

3. Eddie Lee: Korean American and co-founder of the Non Profit “Jubilee Project”. He gives up his career working in the White House to make videos for a good cause. He identifies himself: “I’m a child of God and I know He’s got a plan for me.”

Jubilee Project is not explicitly a Christian project, but they seek to live out these values and encourage people to do good. His brother and co-founder Jason says of their short film on sex trafficking: “What gives us hope, however, is the redemptive power of Jesus Christ to bring healing and hope to victims of sex trafficking. In Job 33:25-26, it is written about the healing power of God…”

Sorry for the long post. Although these guys and girls aren’t in your typical Christian/ministry work, they are all working hard in what they do and also seeking to honour Jesus by living it out. I think that’s great. I hope it encourages us as workers to also work hard and honour Him in whatever God has called us to do 🙂

5 thoughts on “Christians in Media – Asian American and Australian”

What do you think? Cancel reply

This site uses Akismet to reduce spam. Learn how your comment data is processed.